Your Carters store sells quality clothing, gifts, and accessories. It is also the leading seller of children's clothing in the United States, selling more than 10 products for each child born in the United States. Carter's is built on quality and innovation that has been part of the brand since the founding of the company in 1865. 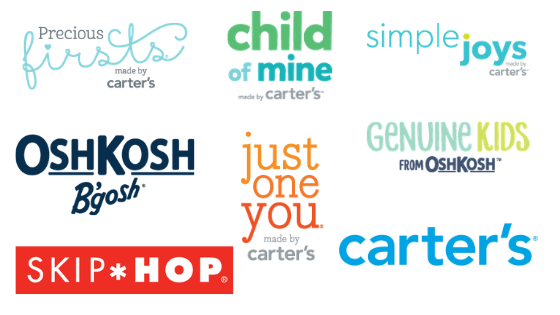 In 2012, Carter's, Inc. released an announcement of a one-million square foot distribution center in Braselton, Georgia. This $50 million facility was built to support the e-commerce, retail, and wholesale portions of the Carters store line. In February 2017, the company acquired Skip Hop, Inc., a global lifestyle brand for children, based out of New York, New York. It purchased the company for $140 million in cash with millions more contingent on the company's performance goals.

Your Carters store believes that children are meant to be celebrated. The brand offers colorful print and designs to reflect their love of children. Carter's supports babies, children, and families through their innovation, designs, quality materials, and varied shopping options. Once such innovation is the Handi-Cuff mitten sleeve that protects babies from scratching themselves.

Another innovation is the Jiffon neck design that slips over the heads of babies easily. After all, there will be many outfit changes in a baby's life, so why not make it easy for families to change their clothing?

The Carters store was founded as the William Carter Company in 1865 by founder William Carter in Needham, Massachusetts. He was born in Alfreton, Derbyshire, England in 1830. Carter arrived in America in 1857 and married his wife, Martha Lee that same year. They had four children. By the 1960s, the Carter store manufactured merchandise at seven mills in Massachusetts and the southern United States. The business remained in the Carter family until 1990, when the Carter's sold the business.

Carter's, Inc. creates partnerships with child-focused organizations through their Carter's Cares programs. Here is a list of some of the ways that Carter's cares about babies and kids in their communities, as listed on www.carters.com.

The ways that Carter's Cares meets the goals above include donating excess inventory nationally and internationally. Each Carters store sponsor in-store programs that allow customers to easily give back to their communities. Carter's, Inc. encourages its employees to volunteer by providing Volunteer Service Time and donate by promoting its Matching Gifts program. Carter's, Inc. also makes grants available to charities which support food distribution, literacy, early education, and scholarships.

In the weeks before Mother's Day each year, Carter's and OskKosh B'gosh support Save the Children's early Steps to School Success Program. This program helps foster language and literacy skills in children from birth to age 5. Customers can support this cause in stores and online prior to the Mother's Day holiday. The Carter's Charitable Foundation matches all customer donations up to $50,000.

This campaign supports Donor's Choose.org and K.I.D.S Fashion Delivers through donations of money and merchandise. Monetary donations are distributed by Donor's Choose.org, while K.I.D.S Fashion Delivers distributes denim clothing. During the back-to-school timeframe, customers can support kids who are in need through in-store or denim clothing donations. The Carter's Charitable Foundation matches all customer donations up to $50,000. OshKosh matches each clothing donation made by customers with another article of clothing, with up to 50,000 items being donated.

This program helps provide books and pajamas to children who have been displaced from their homes. These children include those in foster care and homeless shelters. Carter's has been a partner with the Pajama Program since 2009. Each December, Carter's promotes this program through its stores and online to collect money and pajamas and money. Each year, Carter's donates more than 100,000 pairs of pajamas and matches customer donations up to 50,000 articles of clothing. The intent of this program is to show that someone cares about children who may never have had the simple comfort of clean pajamas and a book.

Here are some of the community partners that work with the Carter's Cares programs:

Carters store offerings include baby items such as the following items.

Carters store apparel is made of various fabrics. Play clothes are made of knit and woven cotton. Sleepwear is made from cotton, fleece, and cotton-jersey materials.

OshKosh brand items consist of clothing for playtime, including the following items:

The OshKosh collection contains apparel that is knit, denim, and woven. It comes in sizes newborn up to 14.

Here is a list of each of the Carter's, Inc. brands:

The first Carters store was founded in 1865. It is headquartered at Phipps Tower in Atlanta, Georgia, United States. It has approximately 20,900 employees and over 600 company-owned stores.

As of 2017, these are the key executives for Carter's, Inc. as per www.bloomberg.com.

Your Carters store or large local retailer is a place to purchase the Carter's brand. Carter's values innovation, which has been alive since its founding in 1865. The Carter's and OshKosh B'Gosh brands are a recognizable symbol of value and quality in clothing and accessories for babies and children.